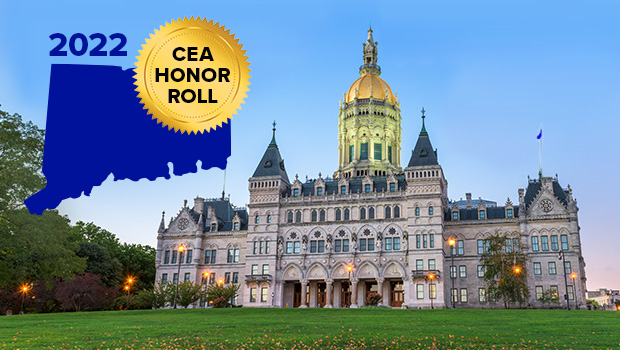 The Connecticut Education Association today released its Honor Roll, a list of legislative and statewide office candidates who are education champions. The Honor Roll and Legislator Report Card are part of CEA’s Candidate Comparison tool that evaluates candidates’ overall support for issues important to students, teachers, and public education.

“While candidates may say they support education, CEA’s Honor Roll shines a light on our true allies—those who stand with us to strengthen our public schools,” said CEA President Kate Dias. “The Honor Roll and CEA’s Legislator Report Card provide our educators with the facts to help them make informed decisions on Election Day and elect pro-education candidates.”

CEA’s Honor Roll designation recognizes incumbents and candidates with a demonstrated commitment to public education and the teaching profession. It takes into consideration a variety of factors, including whether and how legislative candidates responded to CEA’s candidate questionnaire, engaged with CEA staff, leaders, and members, and participated in CEA interviews, as well as relevant actions they took during previously held elected positions.

“CEA’s Legislator Report Card digs into what legislative candidates have done, or not done, how they voted, and whether their actions match their message,” says Dias. “It’s transparent and holds legislators accountable. It serves as a guide for educators, parents, and community members to elect candidates who support our students and our schools.”

She adds, “Education has become a political hot button with attacks against teachers, curriculum, and schools. We are using our voice and our vote to make sure we are heard, respected, and well-represented.”

Click to view the CEA Candidate Comparisons, the Legislator Report Card, and the Statewide Candidates to see the candidates’ positions on specific issues.