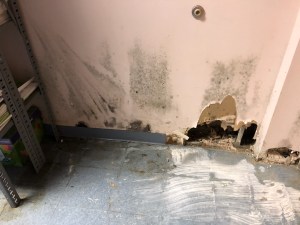 Students are vomiting and complaining of headaches and feeling like they are going to pass out.

It’s too hot, it’s like teaching in a pizza oven, and our students are overheating.

Every morning, I find rodent feces in my pre-k classroom where students work and play.

There are high levels of mold in my classroom and in the building, making students and teachers sick.

Sometimes in the winter, it’s warmer outside.

These are just a few of the comments reported by teachers from across the state who responded to a new CEA survey on environmental issues in their schools. The shocking findings highlight the need to address environmental problems in

Connecticut’s school buildings that jeopardize the health and safety of students and teachers.

“From Stamford to Manchester and towns in between, teachers have been reporting illnesses related to environmental problems within their schools,” says CEA President Jeff Leake. “There’s black mold, rodent droppings, extreme heat and cold temperatures, dust, asbestos, and other issues that are putting our students and teachers at risk every day.”

Teachers and students are reporting respiratory ailments, rashes, sinus issues, and constant coughs. Those with asthma and allergies are facing more acute symptoms. The problem has grown so pervasive that many teachers are forced to go out on leave and students are being sent home sick when they get overheated due to extreme heat and humidity in the classrooms.

“We must take action to ensure the health and safety of everyone in our public schools,” says CEA Executive Director Donald Williams. “This is not just a Connecticut problem. Nearly half of public school buildings across the country have poor indoor-air quality, and teachers have the highest rate of asthma among non-industrial occupations.”

In one district, nearly 80 teachers contacted CEA about health-related issues and the possibility of filing workers’ compensation claims. In at least 10 other districts, CEA is representing members who have been exposed to mold and other toxins.

The mold problem plaguing Stamford and Westport is not unique to these two towns. Mold and other environmental concerns have been reported in Bridgeport, East Hartford, Manchester, Naugatuck, Orange, and Ridgefield, and the list continues to grow.

“Health consequences from mold and dust can harm a person throughout their lifetime and children spend most of their time at school when not at home,” says CEA legal counsel Melanie Kolek, who has been advising hundreds of teachers suffering from workplace illnesses.

She adds, “One of the biggest problems is that dangerous mold and other hazards may not always be visible, but that doesn’t mean they don’t exist.”

Teacher thought to have allergies discovers real source of symptoms

“Imagine my shock as I slowly realized it wasn’t me who had been sick; it was my classroom. And if my room, with its 20-year-old carpet, was sick, probably every other room with that same carpeting was too. I’ve become keenly aware over the years of just how sick our schools can become. During the winter, kids and teachers wear coats inside, and portable space heaters are used to bring classroom temperatures up above 60 degrees. In warm months, we are sometimes sent home early because of the oppressive heat and humidity in our buildings. We have mold in our carpets and dust in our air vents,” says Record.

More than half (53%) of teachers responding to the survey reported environmental conditions in their classrooms that are not conducive to teaching and learning.

“These numbers are shocking, and what’s even more troublesome is that even though teachers are reporting the problems, they are not being properly addressed, and in some cases the problems are being handled with Band-Aid fixes,” Leake explains.

Problems reported but not addressed

The survey found that 40% of teachers reported problems to their school administrator, but the issues were not resolved or only partially resolved. Although teachers are protected under OSHA regulations, only 29 percent said the problems they reported had been fully corrected. They are doing all they can to provide excellent instruction despite these serious health concerns and disruptions in learning.

“Kids cough all day and have itchy eyes. It’s horrible,” one teacher wrote.

“Devastating cuts to our school budgets ultimately undermine staff, students and critical programs, and now we are also seeing a direct impact on building facilities and maintenance,” said Williams. “As buildings get older, more repairs are needs and budgets need to include adequate funding to keep them in working order, free from toxins and other hazards that can cause health concerns for our children and teachers.”

In the warmer months, excessive heat spreads into classrooms throughout the state.

“The temperature can sometimes go above 100 degrees inside the classroom, which is not conducive to learning,” one teacher reported.

“It becomes hot like a sauna, 85 plus degrees,” indicated another.

“Excessive heat in the classroom is not just uncomfortable; it is dangerous,” says CEA President Jeff Leake. “Excessive heat can lead to heat stroke, heat exhaustion, and dehydration and can cause greater health risks for those who suffer from asthma, allergies, and other health-related conditions.”

A Harvard Kennedy School study found heat takes a toll on students, especially those from low-income and minority groups. A University of Tulsa study found that lower classroom temperatures and improved air ventilation improved learning ability and student performance by as much as 10% to 20%, and math scores rose 2.8% when temperatures fell from 78 degrees to 67 degrees.

“Sweltering heat and classrooms without air conditioning strip students of their ability to do their best work,” says Leake. “When classrooms are too hot, students can’t learn, and teachers can’t teach.”

As part of phase one of CEA’s pilot program “Is My School Sick,” teachers across the state recorded the temperature and humidity levels in their classrooms. In May and June of 2019, teachers at 33 schools in Manchester, Bridgeport, Stamford, Region 10, and Stratford collected a large data sample confirming that sweltering classrooms are indeed a problem in Connecticut schools.

The Connecticut Department of Public Health recommends keeping children indoors and somewhere cool in extreme heat, but there are no laws, public health codes, or legal maximum indoor temperatures for public schools. That’s not the case when it comes to standards for business and industry, where the state recommendation for maximum indoor air temperature is 80.5 degrees.

In May and June, Connecticut did not experience an excessive heat wave or higher-than-normal temperatures, but Fairfield County classrooms experienced 153 incidents of temperatures above 80.5 degrees:

In northwestern Connecticut, Lake Garda Elementary School and Har-Bur Middle School had a combined eight incidents of temperatures above 80.5 degrees.

“Some of our schools are over 100 years old and are in dire need of maintenance,” says Bridgeport Education Association President Gary Peluchette. “Others have windows that don’t fully open and classrooms can become saunas forcing the district to dismiss school early.”

The majority of Bridgeport’s schools do not have air conditioning, but Peluchette says even in those that do, maintenance is required to keep the units running, and that’s not always happening.

“The district doesn’t have the funds for maintenance of existing units,” he explains. “Large air conditioners have been purchased, but the district says there are no funds to have them installed.”

“We treat our dogs better than we treat our students,” says Leake. “Kennels have maximum temperature limits, but there are no laws or public health codes in Connecticut regarding excessive heat in school buildings, and that must change.”

He adds, “The situation in our classrooms should raise the ire of every parent in the state of Connecticut, and they should join us in calling on lawmakers to stop putting our children and our teachers at risk and to pass laws to protect them from extreme temperatures in our schools.”

Phase two of the “Is My School Sick” program began in late August in Bridgeport, Stratford, Stamford, Region 10, and Naugatuck, and teachers will continue recording classroom temperatures through the winter months, as many schools experience extreme cold temperatures, forcing students to wear coats and gloves and bring blankets to class.

Leake concluded, “We need legislative solutions that will ensure a timely and appropriate response to health and safety issues in our schools, including the presence of mold, lead, and extreme temperatures. We owe it to our children and teachers to provide the best teaching and learning environment possible.”

Teachers Tell State Board Special Education Is in Crisis
February 2, 2023

Apply for Grants to Support Your Students and Your Learning
January 27, 2023