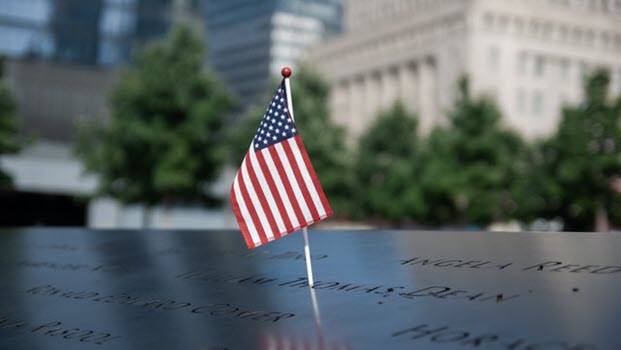 Many educators remember September 11, 2001, in great detail, but for their students the events of that day are history. CEA members say that makes teaching about the terrorist attacks and helping students of today connect to the impact of the attacks all the more important.

This is LeAnn Cassidy’s 34th year in the classroom, and on 9/11 she was teaching sixth grade in Meriden. “We got word that something had hit the first tower,” she says. “TVs in classrooms were new then, and a lot of people were turning them on. I turned it on and then right off because I didn’t want the kids to see.”

The Region 15 middle school teacher has two brothers, one who worked in the financial district in Manhattan and another who was supposed to be on a flight out of Boston that day. Fortunately she found out later that both were safe, but she remembers how much uncertainty there was for so many Connecticut residents that day. A school counselor she knows had a daughter attending school in Manhattan at the time. When he couldn’t reach her, he drove as close to the city as possible and walked the rest of the way in to make sure she was safe.

Berlin High School teacher David Bosso was in his fourth year as a social studies teacher and says he remembers many details from that day. “There was a moment when I had to turn to my class and take a moment to collect myself.”

He had been teaching students about the balance of power between nations and how the relative strength of the United States made it unlikely that we would be attacked by another country. “I was thinking in terms of an attack by another nation, a more conventional attack,” he says.

With monumental events, the big question becomes “Why?” Bosso says. “On that day, we were not equipped to explain why. The causes and long term effects became more clear over the years. Over the next days we watched how things were unfolding in New York City, D.C., and elsewhere—there was a general element of fear. No one was sure what was going to happen next.”

Bosso remembers that the invasion of Afghanistan came not long after. “It felt like things were happening really fast. Social studies teachers were trying to piece everything together.”

Like his colleagues, Michael Sobolewski was in the classroom on 9/11; however, he was a second grader at Cheshire’s Norton Elementary School on the day of the attacks.

The Berlin High School social studies teacher says that he tells his students he doesn’t have many vivid memories from elementary school, but he remembers that day quite clearly. “Another teacher came in and talked to my teacher. We had an old TV that hung in the corner and I remember my teacher turning it to face her. I found out later that this was after the first plane crashed into the tower. She was visibly upset soon after when she saw the second plane hit.”

Sobolweski says that seeing a teacher show a strong emotion was so unusual that the day has stayed with him. It wasn’t until he got home and talked to his parents that he learned why his teacher had been so distressed.

Teaching 9/11 to the students of today

Bosso says that teachers usually aim to take an objective view of historical events and put them in a broader historical and political context. While he does that when teaching 9/11 he also works to personalize the event.

“I’m mindful not to get too into the textbook version of history, and focus on the national, local, and personal impact,” Bosso says. “History always seems distant and objective both in time and space. One of the things I’ve always tried to do with 9/11—and everything I teach—is to make connections.”

Bosso says that he’s found talking about his own memories from that day, though not always easy, is what resonates most with students.

“One of my goals when teaching 9/11 is to help students think about it in ways they haven’t before,” Sobolewski says. He finds students have often heard facts or know about the timeline of the day, but he wants them to have a new perspective.

This year he is showing students a virtual reality (VR) documentary that shares the story of 9/11 survivor Genelle Guzman-McMillan—the last person to be rescued from Ground Zero after spending 27 hours trapped under the rubble. The VR experience recreates New York to show what the city looked like before 9/11.

“I want students to see that in the hours before the attacks, 9/11 was a totally normal day,” Sobolewski says.

At 27, Sobolewski says he’s a relatively young teacher, but it still shocks him in some ways that it’s hard for his students to see 9/11, as many Americans do, as both history and a real present event we’re still dealing with.

He finds that connecting 9/11 to conflicts in the Middle East and the war on terror makes that day more relevant to students. “That clicks with them more since that has been their whole lives—it’s grounded in a reality they can hold on to.”

Cassidy says she began to use poetry and carefully selected images to teach 9/11 not long after the attacks. One image she uses is of a shoe lying in the ash, and she encourages students to make connections to the human impact of the event. Now that she has students who were born almost a decade after the attacks, she also includes a piece to explain the events of the day.

This year she’s using part of a video from the 9/11 Memorial and Museum that features first-person accounts from survivors and the children of people who perished. “We don’t want it to be just about the terrorists, we want it to be about the people and how they were impacted and what impact their suffering has on future generations,” she says.

A 9/11 first responder who is featured in the video stresses the need to find joy in the moment, and Cassidy says, “He had the courage to find the joy, the compassion, and help others. That’s what I try to impart as a social studies teacher. We‘re interdependent, and we rely on one another.”

9/11 has many history lessons to teach, but Cassidy says that in the middle of the pandemic we most need to focus on the social emotional lessons students can learn from the resilience of survivors and the way the country came together in the wake of the attacks. “How do we as people continue to be our best selves and help one another and see the good in the world? Given where we are as a society and the world right now we need to focus on what brings us together, how we can help one another.”

Cassidy worked for many years with a paraeducator who lost three family members on a jet that day. “She emails me every year to ask if I’m going to do the poetry lesson,” Cassidy says. The woman stresses to Cassidy that children need to understand 9/11 and its human impact.

“We learn from the past to make a better future,” Cassidy says. “We look at a horrible experience and think about how we can then teach people to be better, kinder human beings.”

Bosso says that most Connecticut educators, not just social studies teachers, find ways to discuss 9/11 and share their experiences with students. “It’s something teachers discuss and want students to learn about.”

Cassidy says, “At the end of the day, it’s a part of our history. For some people, it’s part of their trauma. And for everyone, it’s a piece of our resilience as a nation. We can’t ever forget.”