The Trauma of Teaching and Learning During a Pandemic Must Be Addressed, Says School Climate Collaborative 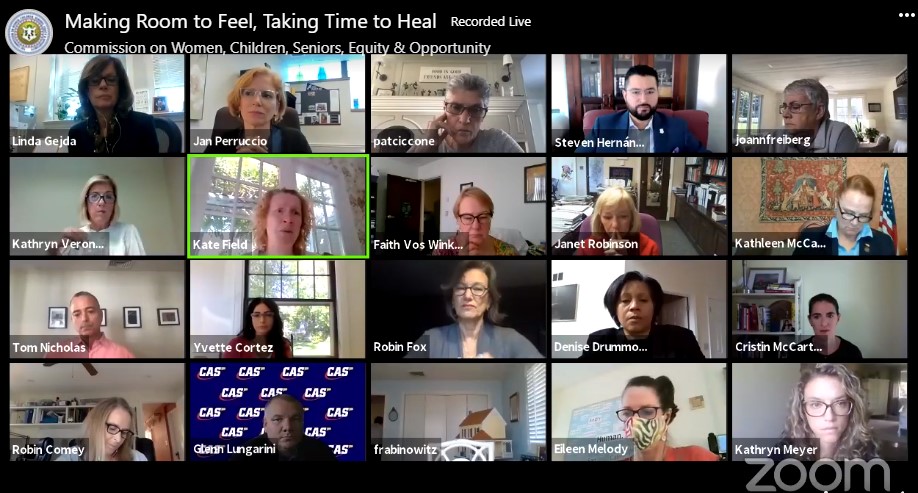 “Teachers are tired. They’re teaching distance learning classes as well as in-person classes and doing two to three times the work they used to do, and they’re exhausted,” CEA Vice President Tom Nicholas shared with members of the state’s SEL and School Climate Collaborative during a meeting today.

The meeting’s focus was the trauma associated with learning and teaching during the pandemic and the need for more to be done to support schools.

Nicholas compared teachers to pilots who have not received their required layover sleep quota, “which will jeopardize our flight if we don’t do something about it.”

“I recently did a self care professional development workshop for teachers, and it felt awful because it was like telling people who are drowning to just do some yoga stretches, it was so ridiculous,” said CEA Teacher Development Specialist Kate Field. “I can’t tell you how many teachers said they’re crying in the car on the way home every day.”

“Throughout this, I’ve been thinking of a line from one of my favorite movies, Field of Dreams: ‘Ease their pain,'” Nicolas, a Manchester school social worker said. “And I’m finding I can’t ease teachers’ pain, and that’s so painful for me. We’re such a rushed society, and we’re not taking time right now for so many things that we need to.”

Nicholas continued, “The state has provided things, but there are so many gaps. You can be three feet away from someone with COVID and as long as it’s under 15 minutes, you’re okay. That’s nonsense. Our health departments are overloaded, and so our teachers sometimes aren’t notified until two weeks later that they had a case of COVID in their class. Those kind of things hurt teachers because they feel like they’re being placated and not really listened to. They’re told, ‘Don’t worry, it’s all going to work out,’ and it’s not going to all work out perfectly.”

“I’m afraid the pandemic just accelerated trends that were already present prior to the pandemic,” said Field. “Kids had already been feeling disconnected, the level of trauma was unprecedented, and then this hit us. My fear is, long after the pandemic is a memory and there’s a vaccine, the affects of the trauma are still going to linger.”

Fran Rabinowitz, executive director of the Connecticut Association of Public School Superintendents, said that this school year she is constantly hearing about social and emotional issues from superintendents around the state.

“If children are displaying frustration and grief, and in some cases emotional paralysis, they’re just signaling what the adults are feeling around them, whether that be staff or families. It’s not just about the children—our staff and our families are feeling all of the emotions,” she said.

“Let’s call it what is, it’s trauma,” said Joann Freiberg of School Climate Consultants. She said in workshops with educators she is finding they are traumatized because they’re overwhelmed. “What if we all didn’t try to click on one more link, but throughout the state decided our classrooms are going to be places where people can heal? If that means academic light, so be it. Educators are breaking.”

State Representative Robin Comey said that she was recently door knocking as part of her reelection campaign and ran into a teacher she recognized who told her, “‘I’m not happy with anything that’s going on right now in schools.’ I think that is indicative of how teachers are feeling,” Comey said.

“I’m an educator; it’s hard for me to say ‘let’s go light on academics,'” said Old Saybrook Superintendent Jan Perruccio, “but I do believe more than ever, if people aren’t prepared to learn and teach, and feel emotionally safe, it’s not going to be successful any way.”

She added, “I don’t know that we’re sending a clear message in our state about what’s most important in our schools.”

“I see the mental load it’s putting on my husband, not being able to trust his administrators,” she said. “It starts from the top. Set the tone and be honest with teachers, be clear with them. I’m hearing over and over again, ‘There are cases, they’re not telling us, the contact tracing isn’t including the teachers, they’re relying on what a 13-year-old says about who they had contact with.’ There’s a lot of mistrust in districts that are not handling this well, and I think that wears on teachers.”

Steven Hernandez, executive director for the state’s Commission on Women, Children, and Seniors closed the meeting by inviting leaders at the state level as well as the town and city level to consider how we can “wrap community around the adults and the kids toward and empathic and connected response that will improve the conditions of living and learning in the State of Connecticut.”

The collaborative will continue its discussion during its next meeting on Tuesday.