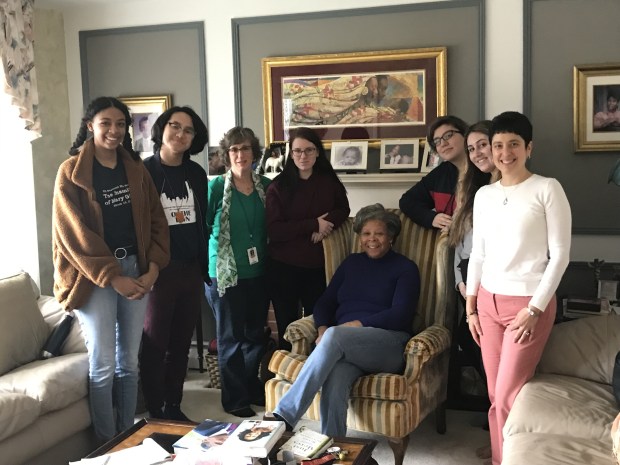 Five years ago, a small eastern Connecticut community made headlines for all the wrong reasons. When the town, which is 94 percent white, hosted a high school football game, African American students on the other team were greeted with racial taunts.

Jerry Fisher, who is executive director of the Jewish Federation of Eastern Connecticut, was dismayed not only by the hurtful comments but also by the fact that they went unchallenged.

Attorney Lonnie Braxton, shown here having lunch with students, serves on the board of the New London Public Library, where he runs an annual film festival with significant films relating to African-American history. He has visited nearly every site on the Civil Rights Trail.

“I was anxious to do something to rectify the situation,” Fisher says, “to change things and approach the racism that seemed to be inherent in our towns. It wasn’t the students who were the problem,” he adds. “It was the parents. We wanted to address the way those parents were modeling for their children. And that’s how our program was born.”

The program he is referring to is Encountering Differences, which connects high school students with African American host mentors living in southeastern Connecticut.

“Our country has a long history of oppression that did not end with the Civil War and did not end last week,” Fisher says.

Through a series of close conversations, student participants learn the personal histories of African American community members and their experiences relating to race. Topics include segregation, the migration North, the Civil Rights movement, and systemic racism. Current acute manifestations of racism are also explored.

“The program strives to help students draw lessons from current and past events, break down cultural barriers, and confront hatred and prejudice,” says Old Saybrook High School library media specialist Christine Bairos, who facilitates the program for her school. “Students are encouraged to think about how they can promote change and advocacy in their school and the greater community as well as examine their own responsibilities in creating a just society.”

Donetta Hodge opens her Waterford home to Old Saybrook students and library media specialist Christine Bairos, along with program coordinator Tammy Kaye, of the Jewish Federation of Eastern Connecticut. Hodge, who recently retired as a compliance officer at Sonalysts, was president of the National Council of Negro Women. When she was seven, she encountered the KKK at a family home.

“What’s vital to the success of this program,” says Bairos, “is that students visit with mentors in their homes. They see their personal artifacts, their family pictures, the things that are special to them, and they hear their stories. The small groups foster relationships and a comfort level that makes it easier to ask and answer some of the difficult questions.”

Retired teacher Florence Clarke, one of the volunteers who opened her home to students, attended segregated schools and remembers as recently as the 1990s being served restaurant meals with plates and silverware different from those used to serve white people. These are among the experiences she shared with program participants.

“If you’re going to make a difference, you have to feel it in your gut,” she says. “These young people will make their corner of the world the best it can be.”

Fellow mentor Donetta Hodge recalls an evening when she was seven years old and visiting relatives in Georgia. She awoke to strange sounds in the yard and a bright light that she believed to be Jesus. When she looked out her window, she saw men in long, white cloaks and felt her intuitions were confirmed. She did not understand then why her family quickly evacuated. Only years later did Hodge come to learn the meaning of the burning cross that destroyed part of the family home.

“It may be painful, but it’s real and not something you sweep under the rug. It’s good for people to share their personal histories. We can learn from each other, and maybe my story will enlighten others about people of color.”

The son of sharecroppers, attorney Lonnie Braxton (center) meets with East Lyme students, as well as teachers Henry Kydd, Matthew LaConti, and Shannon Saglio at his home. Braxton discussed poll-taxes—fees that made it difficult for poor people to vote in the Jim Crow South, disproportionately keeping African Americans from the voting booths. Braxton is holding his mother’s Missouri poll tax receipt from 1962.

“It was intimidating,” she admits. “At first I tried to fit in by changing my appearance, my dress, and the way I talked.” As time went on and she made friends, she became comfortable being herself. Connecting with African American mentors inside and outside her community through Encountering Differences, she says, was affirming, eye-opening, and exciting.

Jeune, Petrucelli, and other student participants also visited historic sites in Harlem, including the Apollo Theater; Canaan Baptist Church of Christ, where Dr. Martin Luther King, Nelson Mandela, and other prominent leaders preached; and the site of the former Audubon Ballroom, where Malcolm X was assassinated. The group also visited the Museum of the City of New York to view their Activist New York exhibit, which explores the city’s history of social activism on issues including civil rights, wages, sexual orientation, and religious freedom.

In a culminating program at the end of the school year, students presented slide shows and videos showcasing highlights of their mentor’s family story and what impacted them the most.

“I hope you will all become stalwarts for what Martin Luther King had as his dream,” Fisher told the group.

Bob Stefanowski on Education: Promises, But No Details
September 29, 2022

New Milford Teachers Standing Up for Their Students and Their Colleagues
June 12, 2020