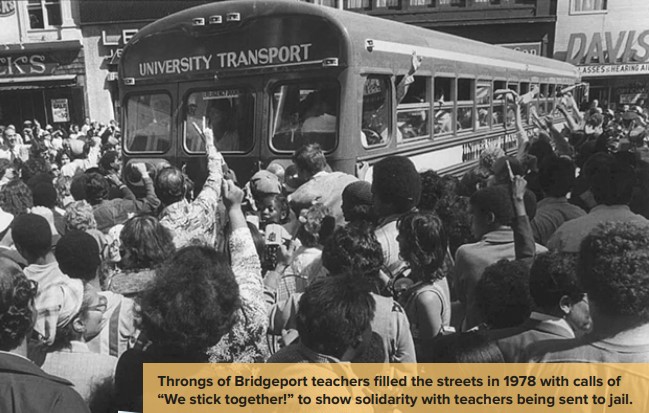 Seeking fair wages and better working conditions, Bridgeport’s 1,200 teachers took part in a strike that turned into a rancorous 19-day affair. A total of 274 Bridgeport teachers were handcuffed, fined, and jailed, as well as strip-searched, deloused, made to use bathroom stalls without doors, and subject to other degradations.

Those 19 days were extremely challenging for Bridgeport teachers, but they found that standing strong together was worth it when they won the improved working conditions and salary increases they had fought so hard for. The strike also led to the Connecticut legislature passing the 1979 Teacher Collective Bargaining Act, which mandates binding arbitration when teachers and the districts they work for reach a stalemate in contract negotiations.

Photos from the Bridgeport strike show thousands of teachers and their supporters surrounding the buses that were carting their colleagues off to prison. Without the solidarity of the entire Bridgeport Education Association, Bridgeport teachers would not have succeeded in improving their schools and their careers. 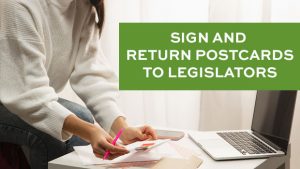 You can advocate for your students and your colleagues right now by signing and mailing the postage-paid postcards to legislators that you received in the mail from CEA.

Sandy Petrucelli-Carbone, one of the strikers in 1978, recalls the fear she felt as she was sentenced and the comfort she received seeing the throngs of people gathered in the streets cheering and shouting, “We stick together!”

1978 can feel like ancient history to many educators teaching today, but CEA President Jeff Leake says that time period is still very relevant.

“Teacher strikes in towns around Connecticut in the 1970s were successful because teachers came together and stood up for one another,” says CEA President Jeff Leake. “Many of us were nervous about what could happen to our jobs and how we would support our families, but we knew fighting for our students, our profession, and fair compensation was worth the risk.”

Leake continues, “This year is extremely challenging—it’s unlike anything we’ve experienced before. I believe that through organizing and coming tougher for collective actions like rallies, protests, letter writing campaigns, and more we can keep students and teachers safe and lessen the stress teachers are experiencing.” 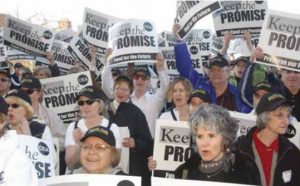 It also took collective action on the part of teachers across Connecticut to end the state’s decades-long underfunding of teacher pensions. Since the 1950s, while teachers faithfully contributed money out of every paycheck, the state did not contribute its fair share to the pension fund. Teachers knew that if they didn’t advocate for themselves and take action, the fund would no longer exist by the time younger teachers reached retirement age.

In 2006, teachers held rallies in towns across Connecticut and thousands rallied at the State Capitol calling on the state to “Keep the Promise” it had made to teachers to ensure them a secure retirement.

“Teachers came from towns and cities all over Connecticut to the Capitol,” says Leake. “It was inspiring to look out and see so many CEA members gathered together in one place.”

Teachers also wrote, called, and held meetings with their legislators and and the governor, and their actions were successful. In 2007, the state bonded $2 billion to shore up the fund and committed to contribute its full share every year.

“Lawmakers didn’t just wake up one day and decide to properly fund our pensions,” Leake says. “It took sustained action by thousands of teachers, all speaking with one voice.”

States across the country have recently seen waves of collective action similar to those Connecticut experienced in the 1970s. In 2018, teachers who had long received dismal salaries and experienced poor working conditions rose up and demanded better.

From West Virginia to Arizona to Colorado teachers wore #RedforEd and marched on their state capitols. Tens of thousands of teachers joined together to make change possible. Their collective action paid off with teachers receiving well-deserved and overdue pay raises.

An Oklahoma teacher said, “We always talk to our students about standing together, standing up for what’s right, finding your voice. Red for Ed is a way for all of us in the union to pull our voices together and speak louder than we could on our own.”

“Red for Ed means for me that we have decided we’re not going to sit down and take it,” said a Michigan teacher. “We’re going to make our schools the best that we possibly can for every student.”

Organizing during a pandemic

Rallies bringing hundreds of teachers together shoulder to shoulder are safety hazards during a global pandemic, but teachers are finding virtual and socially distant ways to stand together right now.

As boards of education and town councils vote on issues affecting students, teachers, and schools, members are writing letters, joining virtual meetings, and giving public comment. Hundreds of teachers are turning out for socially distant, masked rallies, holding signs, and talking to the news media.

Teachers are also contacting their legislators, writing postcards, and signing petitions to make sure their voices are heard. Make sure you join your colleagues and sign and send the postcards to legislators you received from CEA.

Teachers’ efforts are being rewarded. In Stratford, teachers who rallied together, wrote letters, and spoke with the news media succeeded in moving schools fully remote after Thanksgiving. In Hamden, teachers’ passionate letters lead the Board of Education to vote to go fully remote from Thanksgiving through January 19. Other districts have seen similar successes that come when large numbers of teachers are willing to speak out and make their voices heard.

“I want to thank all of the teachers who have been speaking up and engaging in collective action,” says Leake. “We at CEA will continue to work tirelessly on your behalf. Please remember what history has shown us: We all need to come together around a common cause in order to achieve significant change.”

Leake adds, “A union is only as strong, effective, and powerful as the members who are involved and willing to take action.”

Save While Keeping Your Resolutions With Deals from NEA Member Benefits
January 14, 2022