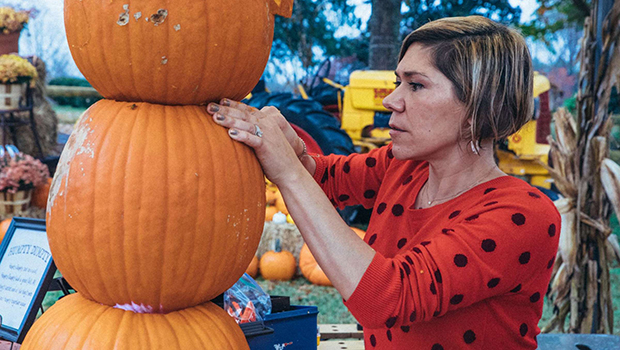 “It was definitely a once-in-a-lifetime opportunity, and I learned so much,” says Monroe art teacher Chrissy Scarpati of her experience as a contestant on the Food Network’s Outrageous Pumpkins show. She joined seven other contestants competing for a $25,000 prize on the second season of the show that aired this month.

“The thing about being an art teacher is that there are always things I’m practicing and trying out on the side,” says the Fawn Hollow Elementary School teacher. “Carving was just a hobby for me for the last six years—I just did it in the fall for fun.”

Over the years, she’s posted photos of her carvings on her public Instagram account. One day during the summer of 2020, she received an Instagram message from someone she didn’t know saying they thought she’d be perfect for the Outrageous Pumpkins show.

Scarpati was suspicious at first, because she’s a big Food Network fan and had never heard of the program. After some Googling, she realized the message was legitimate, and the production company explained that since the show is filmed a year in advance, the first season hadn’t aired yet.

“At first I wasn’t sure I’d be able to do it,” Scarpati says. The shooting took place in November 2020, during the height of COVID’s impact on schools, and substitutes were hard to find. 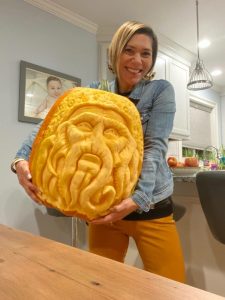 Scarpati holds up one of her carvings. (Photo courtesy of Chrissy Scarpati.)

“My district was really great about it—my superintendent and principal were very supportive,” says Scarpati, who left plans for her substitute as well as video lessons so her students could keep up with their learning. It was hard being away from family too, as her daughters were five and one at the time, but her husband encouraged her to go for it.

“Lots of other contestants on the show are professional artists or have been on other Food Network shows before,” says Scarpati, “so it was really an honor to even be invited. It was all new to me—I didn’t know anyone in the carving world.”

Scarpati says the show stretched her outside of her comfort zone, and she thoroughly enjoyed it. She usually spends much longer on a pumpkin than the three to four hours per carving that the show allowed, and she’d never built anything like the challenges on the show required.

“The whole thing was out of my wheelhouse. I don’t usually use power tools on my art and I usually just carve what I want to carve.”

Scarpati made it through the first two episodes of the four episode show before being eliminated.

“I’m hoping to show not only our two daughters but also my students that it’s important to try new things and not do everything perfectly and not win at everything you do. I learn more by failing,” she says.

Many of her students watched the show as it aired this October, and after the episode where she left the show, students brought in little notes and tokens. “I told them, ‘I was so happy to be there, don’t feel bad, I learned so much.’ I wouldn’t have guessed that I could carve so quickly and build like that.”

The filming for the show took place before COVID vaccines were available, but Scarpati says the Foot Network was fantastic and their precautions made her feel very safe. Everyone was tested every day, wore masks, and didn’t go anywhere except for the set and their hotel rooms.

Scarpati says getting to meet her fellow contestants and others associated with the show was one of the best parts of the experience. “We keep in touch—the people were really great. It really didn’t feel like we were in competition with each other; it felt like we were just competing against the clock. We’d share tools and help each other out.”

Carving with the next generation 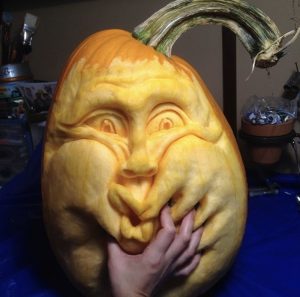 Another of Scarpati’s creations. (Photo courtesy of Chrissy Scarpati.)

The connections Scarpati made participating on the show led to an unusual and rewarding experience for her students. Pumpkin Carver Deane Arnold has been on the Food Network’s Halloween Wars show and worked behind the scenes on the Outrageous Pumpkin.

“We’d stayed in touch over the year. He told me he was coming to do a carve at the Bronx Zoo at the end of September and said, ‘Why don’t we do a carve together?'” Scarpati invited him to her school to lead a carve for the fifth grade classes.

“He was super excited, and he helped me figure out how to ask for pumpkin donations,” she says.

The wet summer negatively affected this year’s pumpkin crop, but Jones Family Farms in Shelton were very supportive when they heard about Scarpati’s plans for their pumpkins and stepped up to donate 140 pumpkins to the school.

“The kids had an amazing time,” she says. “Deane carved for the whole day. He was leading classes and I’d go around and help the kids.”

She adds, “The kids were more than excited, and they all left with something that looked like a face. Parents asked where to buy the tools after, and some kids carved more at home. I told them, ‘I only started six years ago. You never know where it could take you!'”

Click here to view photos of the fifth-grade carving activity from The Monroe Sun.

Join Us for Teacher Appreciation Games at the New England Revolution
June 22, 2022