Teachers, Parents, and Students Rally at the State Capitol for Mental Health Supports in Killingly 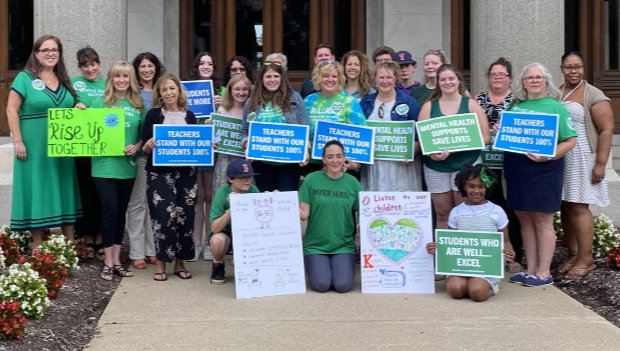 After eight months of fighting the Killingly Board of Education over its decision to reject a mental health center in the high school, teachers, parents, and students took their concerns to the State Capitol in Hartford.

Wearing green and holding signs that read, “Student who are well… excel,” “teachers stand with our students 100%,” and “mental health supports save lives,” the mental health advocates, joined by Senator Mae Flexer, rallied and held a news conference on Wednesday urging the State Department of Education (SDE) to take action.

The Killingly Board of Education rejected a grant-funded, school-based mental health center, which led concerned parents and residents to file a complaint against the board. The SDE is investigating whether voting down the proposal violated the educational interest of students.

Former Killingly student Julia Revellese said, “It’s hard for students who need help and can’t get it.” Her mother was able to find support and drive her to receive mental health counseling, but she knows other students aren’t as fortunate. “I don’t know if I would be here if I hadn’t received help, and so many students don’t have access to the help they need.”

Senator Flexer thanked all the supporters who have been advocating for mental health services in Killingly for coming out to the rally, especially the students, who have been begging for assistance.

“I really appreciate the way young people have stepped forward and been so honest about their needs, about the struggles they are facing as individuals, and the struggles that they see their peers dealing with. They have come forward, they have stepped up, and said ‘this is what we need, and please help us.’” 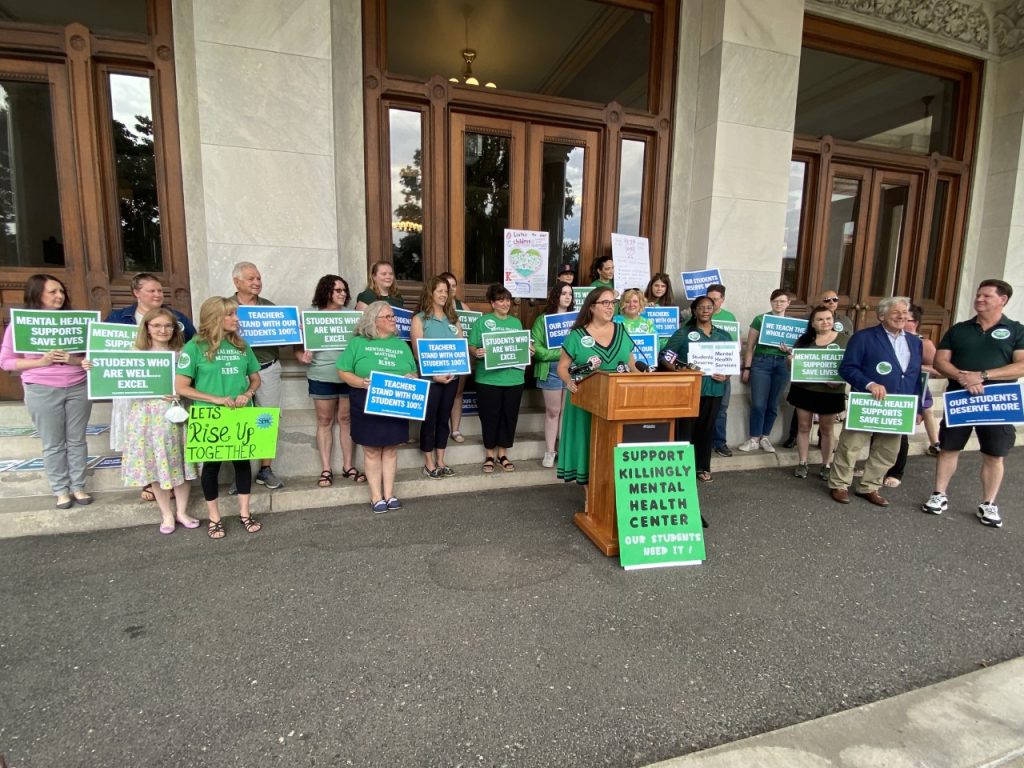 Senator Mae Flexer said that Killingly students should have access to the same level of services as students in any other community.

She stressed that Killingly students should have access to the same level of services as students in any other community.

“Unfortunately,” Flexer said, “the people in charge of education in the town of Killingly have chosen to deny those needs and attempted to silence the advocates of the school-based health center. Extreme politics should not be what’s deciding what’s available for students at Killingly High School.”

Jenelle Provencher, a second-grade teacher at Killingly Elementary School, says some children are not emotionally ready to learn.

“As a teacher, I have seen children as young as seven whose mental health is not doing well. I will never forget the day when we had to call 211 for two children in second grade,” said Provencher.

She says Killingly must take advantage of this opportunity to provide mental health supports because, “students who require and have access to mental health counseling are much more likely to perform in classrooms instead of shutting down, skipping class, or dropping out.”

Sisters Rachel and Margaret Flaherty attended the rally because, as an athletic trainer and soon-to-be school counselor respectively, they understand the need to focus on the whole child.

“Mental health impacts student athletes’ ability to perform both in the classroom and on the field, and we must do all we can to support the mental health of students so they can succeed,” they said.

According to a survey of Killingly students, 77 students said that they were considering suicide.

“It’s distressing to me when you hear that 77 children said they were considering suicide and the board’s response was to call them liars. That’s not right. It’s unfair and dismissive and more importantly, it serves to shame the issue of mental health,” said CEA President Kate Dias. 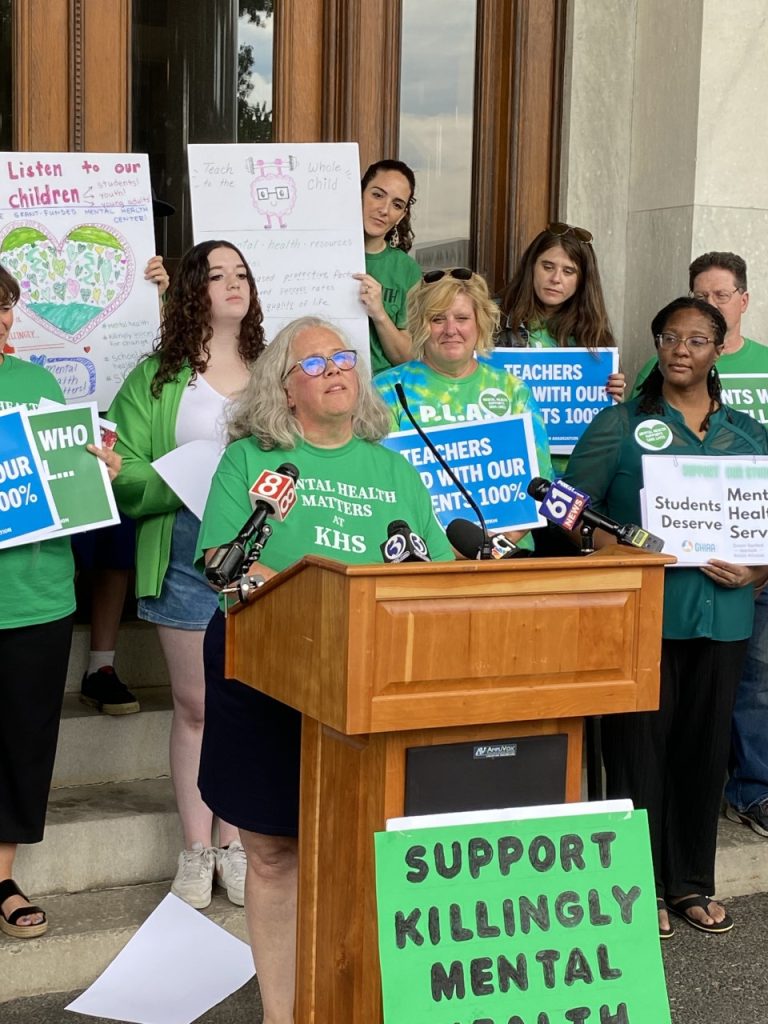 She continued, “We wouldn’t say that to 77 children who are diagnosed with diabetes. We wouldn’t say that to 77 children who broke their arms, and tell them, ‘no you didn’t, and you don’t need help.’ Somehow, we are looking at children who are really crying out for services and asking for support in an area where we all agree, including legislators, who took bipartisan unanimous action, stood up and said ‘mental health matters.’ When you have legislators, parents, children, and educators begging for help, I am not sure how you can be dismissive in good conscience.”

Parent Lisa Girard attended the rally with her two sons because she wants students to be heard and not silenced. “September is Suicide Prevention Awareness Month, and we can’t ignore our students, especially when so many have said they have plans to take their own lives.”

The community members are waiting for the State Board of Education to complete its investigation and hoping they will step in and decide whether the Killingly BOE members are upholding their responsibility of providing supports necessary for children to learn.

Parent and community organizer Christine Rosati-Randall says everyone across the state should be concerned about what’s happening in Killingly because it could happen in their town. “Sometimes the wrong people get put into power, which is what has happened in Killingly, and our students are paying the price.”

The overwhelming majority of community members have shown their support to ensure students’ voices are heard, but she says, “Our students have been dismissed.” She quoted a student who said. “It’s like a cry for help that’s going unanswered.”

Dias concluded, “This is critical. It is a do or die situation. I seriously hope the Board of Ed does right by the town of Killingly. The kids deserve it, the parents deserve it, and the teachers deserve it.”